My Year of Teaching Dangerously

This past Friday afternoon after dismissal, I was putting errant chairs up on desks, collecting student journals to read and stuffing papers into my backpack to grade over the weekend, and I got word of the Paris attacks. I turned on the radio and scrolled through social media to find information, and I listened to a translation of President Hollande´s immediate response to the shootings. 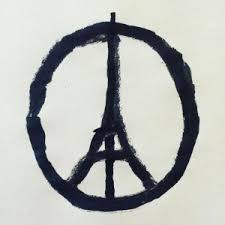 He said, ¨(W)e are going to lead a war which will be pitiless.¨  He pledged to take on the terrorists — who had not yet been named — and he said, ¨faced with terror, France must be strong, it must be great and the state authorities must be firm. We will be.¨

I thought immediately about 9/11, and a dinner shortly thereafter I had with my brilliant friend Raquiba LaBrie, who, despite living in New York, was distraught by the Bush administration´s immediate military response in Afghanistan.¨This is a failure of imagination,” she said.

Her words have resonated with me since that dinner. If we cannot envision another world, we most certainly cannot make it happen. And I am making it my goal, starting today, to prioritize pushing young people to develop a radical imagination. We must not stand firm; we must be fluid and we must cultivate an unending and unafraid creativity.

This idea that we must respond to violence with violence is easy. It is not creative. It is what we have always done. We do it as kids, on the yard: she hit me, so I hit her. This playground logic is writ large, and tragic, in global relations: they attacked us, so we will attack them. We will be pitiless.

When this happens in the world, then, we take sides. We are either pro-war, or anti-war. We go to rallies to support or decry the war. We usually see complex issues and actions with these two options: are you pro, or are you con? Do we attack, or do we not attack? The problem with this thinking, as Robin Hoseman, a fellow educator and member of my PLC, says, is that any large issue in this wild and precious world is not ¨problem of sides. It’s a tangled web of complexity that can be understood.¨

This is where we must find ways to activate and allow a radical imagination to take root in our young people until divergent thinking become the norm. It is a sad cliche that schools are really good at killing imagination and creativity.  James Clear, in his blog, writes:

In the 1960s, a creative performance researcher named George Land conducted a study of 1,600 five-year-olds and 98 percent of the children scored in the “highly creative” range. Dr. Land re-tested each subject during five year increments. When the same children were 10-years-old, only 30 percent scored in the highly creative range. This number dropped to 12 percent by age 15 and just 2 percent by age 25. As the children grew into adults they effectively had the creativity trained out of them. In the words of Dr. Land, “non-creative behavior is learned.¨

Surely, this diminishing creativity is because we teach what is acceptable and what is not acceptable (yes! you are standing in line right! hey! that is the wrong way to write a story!) but I believe that much of it lies in our binary ways of approaching difficult, controversial issues. I have been monumentally guilty of this. And this is why I am thinking I will never teach debate again.

Many well-meaning and critical-thinking-valuing teachers (me!) will encourage students to think about difficult issues (should teenagers be allowed to vote? should marijuana be legal? is John Brown a hero or an antihero?) already framing the issue in terms of established, well-trodden paths of thought and action. While allowing students to evaluate ¨two sides¨ of an issue does develop a certain variety of critical thinking, it does not develop divergent thinking or habits of deep, creative inquiry. In fact, this type of thinking — most spectacularly evident in the ever-present high school ¨debate unit¨ — it reifies specific, restrictive ways of thinking about complex issues. It takes, as a given, that there are two ways to think about an issue; two ways that have usually been tried out or advocated for by people with power. The question (and thus, the responses) have already been framed — here, I use the passive voice with intention.

How might we open up these issues to a whole range of inquiry and creative, divergent thinking? How might we look at, and address, the violence in Paris, in Beirut, in Syria, on 66th and International in Oakland, with a surfeiting of imagination?  How might we cultivate completely different ways of thinking about complex issues?

It is clear we have to start by banishing the either/or thinking that we sometimes consciously and often unconsciously teach our young people. Using Design Thinking is a wonderful start that allows wild ideating and centers empathy. Creative Inquiry is another beautiful way to frog-jump limits and to investigate options.

When I go into the classroom tomorrow morning, I want to urge my students not to passively accept how questions are framed. I want them to question and bypass conventional ways of ¨thinking critically¨ by allowing time and space to examine the complexity that, Robin Hoseman reminds us, can be understood. I want to encourage speculation, divergent envisioning, and a flexible, decidedly non-pitiless stance. We need to de-center the closed circuitry of either/or thinking and cultivate radical imagination in ourselves, and in our students.

This will not be easy. But — and I am certain of this —  it will be worth it.

3 thoughts on “On Cultivating Radical Imagination, or Why I Will Never Teach Debate Again”